skip to main | skip to sidebar

Deer Season 2013 was a successful season despite the warmer than normal temperatures. We had an inch of rain during opening weekend, but it stayed dry the rest of the season. The acorn crop was better than average, which brought down plenty of blacktail deer. All of our hunters scored bucks, here's a look at some of them.

The DASH Ranch sits within the Deer Hunting Zone C. We also offer Rocky Mountain Elk hunts--for that we sit in hunt area 305 Northeastern CA Bull and 304 Northeastern CA Antlerless. pig, turkey, and blacktail deer hunts on the property. If you are interested in booking a hunt, give Dave a call at 530.941.2112 or visit the website.

Ray, who has shot some trophy blacktail bucks here, was on the hunt for one that could top his last few kills. After turning down a number tremendous blacktails, that most guys would think you're out of your mind to pass up, at the last hour of his hunt he had to settle for this "pepperoni buck." (His girlfriend requested pepperoni sticks, so he had to return with something.)

Should have seen the bull that busted up this guy's rack at the DASH Ranch.

This bull brushed up after his beating, too. 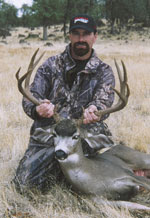 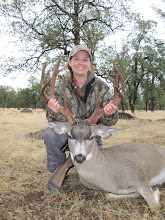 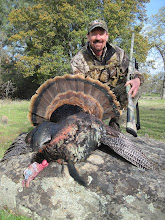 Check out the double beard 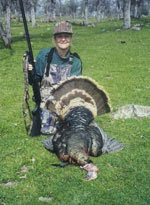